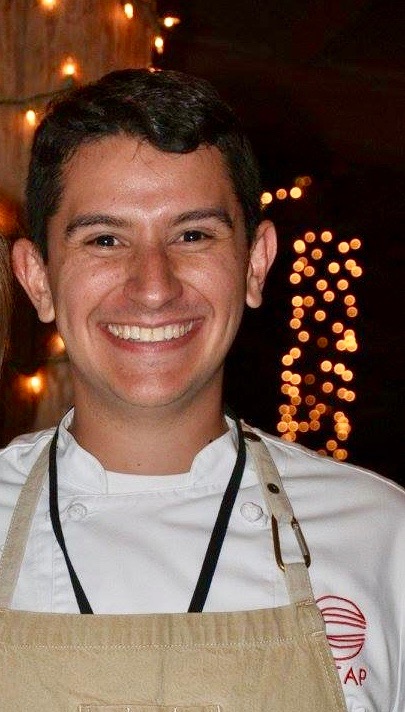 Luke Cornelius is a 2010 graduate whose culinary journey was not a “love at first sight” story. He was an avid baseball player in high school, but when circumstances led him to quit baseball, he turned to culinary on a friend’s recommendation. As he began to explore cooking as a new interest, Luke was persistent in asking his teacher, Patti Pastor of Flagstaff High School, about the C-CAP competition. He wanted to be a part of it! His wish came true his junior year when he participated in the competition, after which he was ranked #1 in his class, awarding him a junior scholarship from Johnson & Wales. Luke spent 4 days in Denver at J&W, which then led him to be invited to compete at the ACF competition that year. Luke recalls what a huge learning experience that was! That same year, Luke was presented with an opportunity to work at one of the premiere restaurants in Flagstaff, AZ – Tinderbox Kitchen. He remembers leaving school to go to his interview…and getting hired on the spot! Before long, he was working 50 hours a week while finishing high school.

Senior year, Luke competed again and won a $4000 James Beard cash scholarship and a half-tuition scholarship to The Art Institute of Denver. Although his heart was set on Johnson & Wales, he went to the Art Institute for a year, until he realized that the best decision for him was to return to the workforce. He returned to Tinderbox for a year while taking classes at Northern Arizona University in Hotel & Restaurant Management (and a Business minor), where he graduated in 2015.

Luke then took a job opportunity working with Patti Pastor at his alma mater, as a supplementary instructor for the C-CAP students. After a year, he took a handful of other job opportunities, all keeping him busy working 90+ hours a week! A much-needed break led Luke to take 3 months off to travel in Europe, during which time it became clear he wanted to go into management. Upon his return, Luke got a job working as the front of house manager at Sauce in Scottsdale, AZ. After six months at Sauce, Luke is enjoying his job.

Giving back is important to Luke. He says of C-CAP “it was a great platform for helping me move forward in life and find a career I could be successful in.” Now, he continues to be one of the most involved alumni in our program; he helped create our very own Fuel Up to Play 60 campaign with the Dairy Council of Arizona.