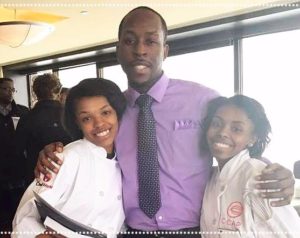 On the first day of joining his culinary program at Paul L. Dunbar High School, Kenneth’s chef instructor Robert Brent told him that he had an attention to detail that he had never seen before. Since then, cooking has been a passion and refuge for Kenneth.

Kenneth got involved with C-CAP his junior year of high school when he attended a week-long Nutrition Camp where he was surrounded by people who were dedicated to seeing him grow as a culinarian. “That gave me a family-oriented love that I needed and shaped me into who I am today.” After attending Washburne Culinary Institute, Kenneth had a brief stint cooking for The Walt Disney Company in Orlando. He is now living, working, and cooking in his hometown of Chicago.

Kenneth explains that in the community he grew up in, society can write off young people without a second glance. He is proud that his personal growth, which was fostered by great mentors, is what allowed him to defy the odds of being a mere statistic. Today, he is making a conscious effort to positively impact his community in the way C-CAP and his mentors did for him. Through the C-CAP Chicago Alumni Association, Kenneth and his colleagues have established a scholarship for C-CAP students in addition to supporting them through guidance and mentorship.

Kenneth also started his own community organization called, No Matter What, meant to inspire and motivate youth to push through hardships no matter what they might be going through. When asked what valuable things a young person can do to impact their community, Kenneth simply expresses to “have a heart.” He encourages any students who want to make changes for themselves or their community to use their talents to give back in any way that they can. “If you can impact the life of one person and that one person impacts another … it creates a chain of impact in your community. Rather than stay discouraged, continue to create a chain of love that will inevitably impact and create connections across the world.”