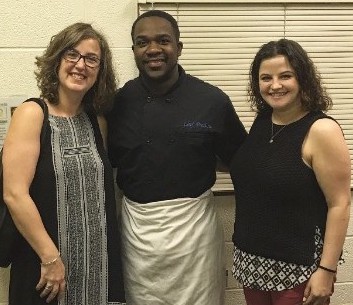 Keith Pretlow has come a long way from his culinary beginnings. While his cousins played outside, his mother and grandparents made young Keith learn the art of cooking to channel all of that excess energy he had.

As a student at Murrell Dobbins C.T.E High School in Philadelphia, Keith found himself once again in the kitchen, but this time it wasn’t a punishment. His teacher, Chef Scott Clarke, took him under his wing and acted not only as a mentor, but a father figure as well. “He helped me in ways I couldn’t imagine,” Keith recalls, and he took his skills to a whole other level using gourmet techniques and ingredients. With a scholarship from C-CAP, Keith went to The Restaurant School of Walnut Hill, earned an Associate’s Degree in Culinary Arts and continued his education at Cairn University, all the while returning to Dobbins as a student teacher on breaks from school.

After post-secondary school, Keith joined the Army and had the chance to travel and enjoy new culinary experiences. After being stationed in Korea, he now eats kimchi almost every day. Though he wasn’t focused on cooking, he again found himself teaching the principles he learned as a C-CAP student to culinary students while on leave. After retiring from the Army he couldn’t deny the pull that kept bringing him back to the classroom. Keith connected with C-CAP Philadelphia’s Program Director Keri Fisher and Coordinator Alyssa Termini through his long-time mentor and friend Richard Grausman and is now their newest C-CAP chef instructor.

Keith wasted no time after starting at Benjamin Franklin High School in the fall. In just one semester, his students’ grade point averages have increased across the board and parents tell him they see a difference in their children’s behavior and attitude. The whole school seems to have taken notice because Keith now has a waiting list to get into his class. In addition to teaching culinary math and English, food service law, and hands-on training, Keith and his students run a full-service restaurant and catering service at the school. All proceeds go back to the culinary program so Keith and his fellow instructors can provide more opportunities for their students, such as learning how to use unexpected ingredients like blood sausage and rabbit. Reflecting on his journey and the importance of being a mentor to his students, Keith says, “Culinary changed the course of my life and C-CAP was a huge part of that…We all have something to give back. When people feel like they have something they can give to the community, they are more willing to do that. I see that in my students every day.”