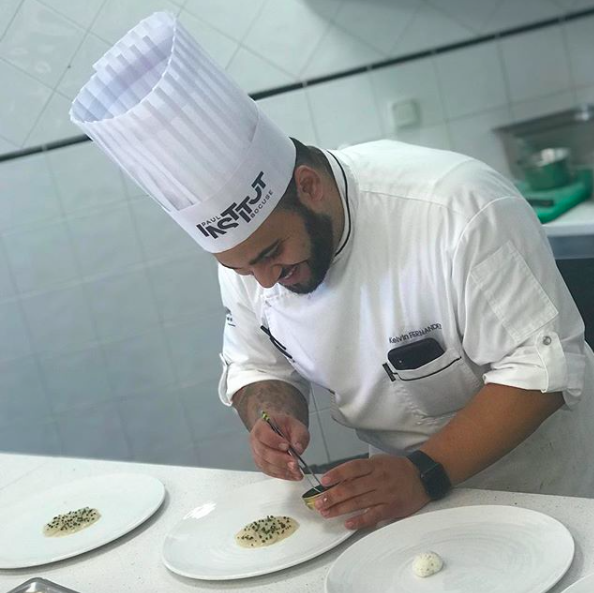 After a heated competition earlier this year, C-CAP alum Kelvin Fernandez won the Daniel Boulud/C-CAP 2018 Institut Paul Bocuse Scholarship which afforded him the opportunity to stage for four weeks in renowned restaurants in Lyon, France. Chef Fernandez (pictured above) wrapped up his time in France in May and used the time to its fullest to sharpen his skills, which he plans to pour into his work back in New York City.

“The two most important days of your life are when you are born, and when you find out why… I am grateful for the opportunity I have had the past 30 days working in Lyon France with some talented people! I can’t believe a month has flown by… looking forward to coming back home and showing you what I have learned!”

For the full picture of Kelvin’s road to France, let’s rewind to the beginning:

Born in New York to Dominican parents, Kelvin Fernandez never dreamed he would become a chef. In fact, he never showed an interest in food – despite the fact that his dad was a chef – until he enrolled in a cooking class at Long Island City High School in order to impress his high school sweetheart. That class ignited a passion for all things culinary. Through C-CAP he earned a scholarship to attend The Culinary Institute of America (CIA) in Hyde Park, NY. Now at age 32, Fernandez has made a name for himself landing on the prestigious “30 under 30” list by Forbes Magazine for food and wine in 2015. He was also a runner-up on Food Network’s Chopped and won competitions on FYI Network’s Man vs. Child and Food Network’s Beat Bobby Flay.

With the support of C-CAP, Fernandez’s style has been influenced by latin cuisine and flavors and his career has landed him in notable NYC kitchens, such as Water’s Edge, Aquavit, Gotham Bar & Grill, Café des Artistes, La Marina, and most recently helming the kitchen at the Strand Bistro Restaurant at Marriott Vacation Club’s Pulse Hotel in NYC.

Learn more about Kelvin in this feature from People Español.