I know what you’re thinking, but it’s not C-CAP’s anniversary I’m referring to here. Over the past few months our students from coast to coast have been giving it all they’ve got in the final competitions, drawing on everything from their soft skills to their knife skills in the hopes of securing scholarships to some of the top culinary institutions across the country and continuing on their journey to becoming the next generation of great chefs. We’re thrilled to announce that we were able to award over three million dollars in scholarships to our students this spring, bringing our historical total to a whopping $50 million!

This year has also seen the launch of new pilot job training programs in Chicago, New York and Philadelphia, allowing us to mentor more students through C-CAP. Scroll down to check out Marcus Samuelsson teaching our job training students how to make his famous yard bird! In Arizona, our students are perfecting their knife skills at our veggie valet at the local farmers’ market, and our alumni are taking part in brand new workshops this summer, further expanding their skills and connecting them directly with professional chefs.

As the restaurant industry continues to surge, with a forecasted growth of 1.7 million positions by 2025, there is a rapidly increasing need for trained, hard working and dedicated staff.  Thanks to your continued support, we are helping the industry solve this problem while having our students embark on a successful career path. 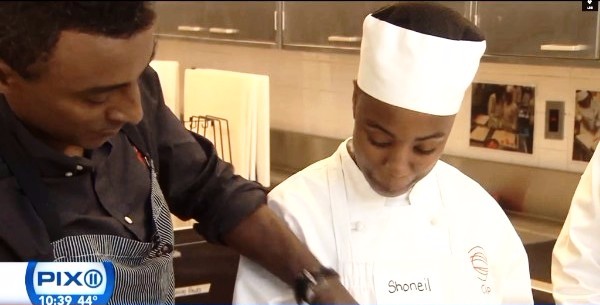 Internationally-acclaimed Chef and Board Co-Chair, Marcus Samuelsson, shows students at C-CAP’s After School Program how to make his famous ‘Yard Bird,’ click to watch! 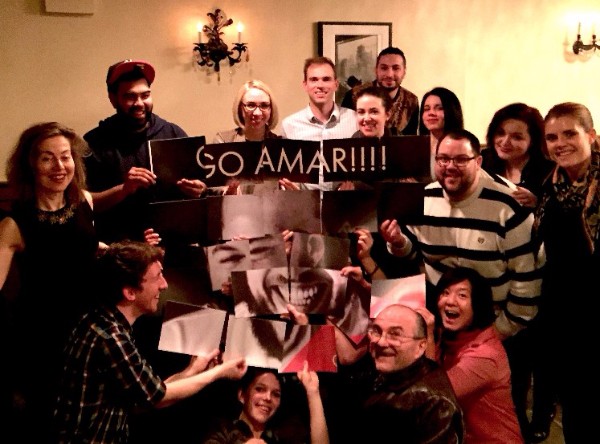 C-CAP alum Amar Santana made it all the way to the FINALE in Season 13 of Top Chef! We gathered alumni, supporters, team members and Amar’s first culinary teacher, Terry Matsis, to watch the final episode at Humboldt & Jackson! 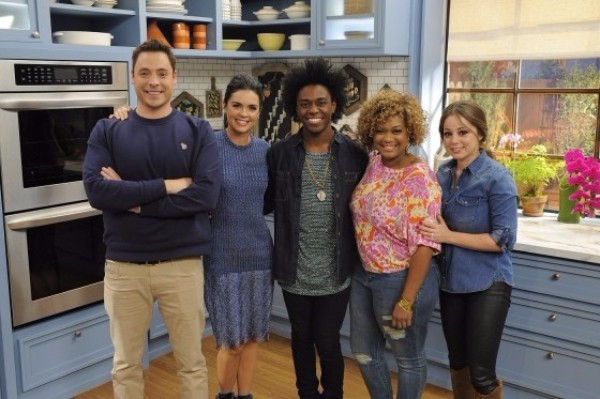 C-CAPer Lazarus Lynch (aka Son of a Southern Chef) recently got the opportunity to teach the cast of Food Network’s The Kitchen his recipe for ‘bama Mud Pie! Watch the full episode here. 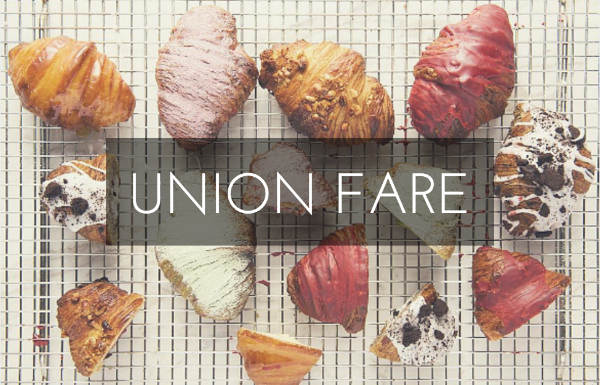 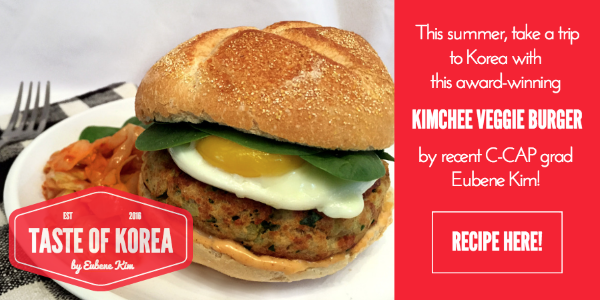 Rosé & Rooftops
June 13 – 6-8 pm
Rooftop + Rosé = Yes, please! Join the C-CAP Junior Board at Hotel Hugo‘s Rooftop Bar on June 13th for an evening of rosé, delicious bites, sweet treats and a sunset that will make you remember why you moved to this big, beautiful city! Early bird tickets are selling like rosé on a hot summer day so be sure to grab your tickets soon! 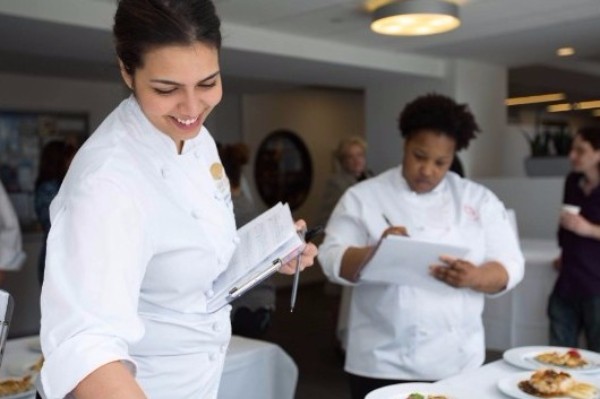 When we say ‘when you’re in C-CAP, you’re in C-CAP for life’, we mean it. Whether this means making a connection, reviewing an alum’s work contract or sending our alumni to Spain, France, Japan or Mexico to continue their education, we are committed to standing by our alums throughout their entire career.

C-CAP Alumna Giovanna Alvarez (left above) recently won the C-CAP/Daniel Boulud Scholarship and is currently studying at the Institut Paul Bocuse in Lyon, France! Krystal Lewis and Rafael (Alex) Perezchica, C-CAP alums from Chicago and L.A., received the Olesay/C-CAP scholarship and will be heading to Spain for a 5-month all-expense paid stage at Restaurant Sant Pau.

Learn more about the two talented Olesay/C-CAP winners below. 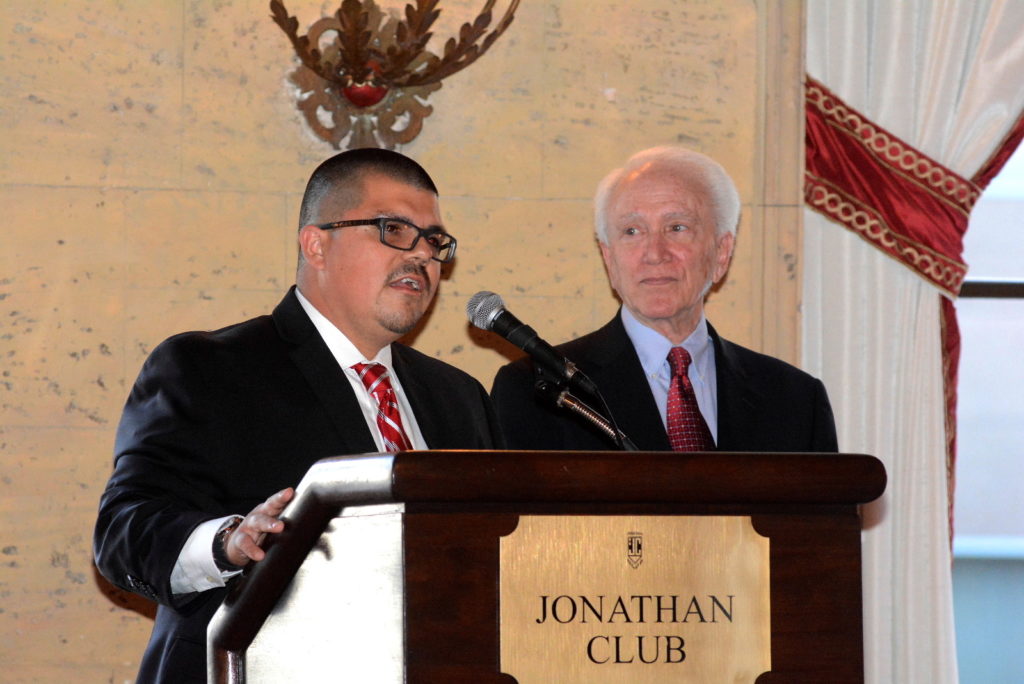 Alex was an incredibly talented and hard-working high school student. C-CAP awarded Alex a scholarship to the Art Institute of Houston where he excelled in his work. He quickly climbed through the culinary ranks and landed in the kitchen of the famed Hotel Bel-Air in Los Angeles. The pressure of this rapid rise began to weigh on Alex and an experimentation with drugs and alcohol that began in college worsened to the point where he was unable to maintain his job. He took a job at the Holiday Inn, as he struggled to put his life back together.

He needed a change of pace and moved to Palm Springs, where C-CAP Founder Richard Grausman helped him secure a job at the Ritz-Carlton and begin to rebuild his career. He eventually moved to the Ace Hotel where he currently works as a sous chef. “The road was not an easy one, but it has taught me open mindedness, patience, tolerance and humility,” Alex says of his journey. Of his upcoming stage in Spain, Alex believes “it will catapult my career and empower me to accomplish my goals.”

Alex would like to let future C-CAP alumni know that they can reach out to either him or C-CAP for any problems that arise in their lives. 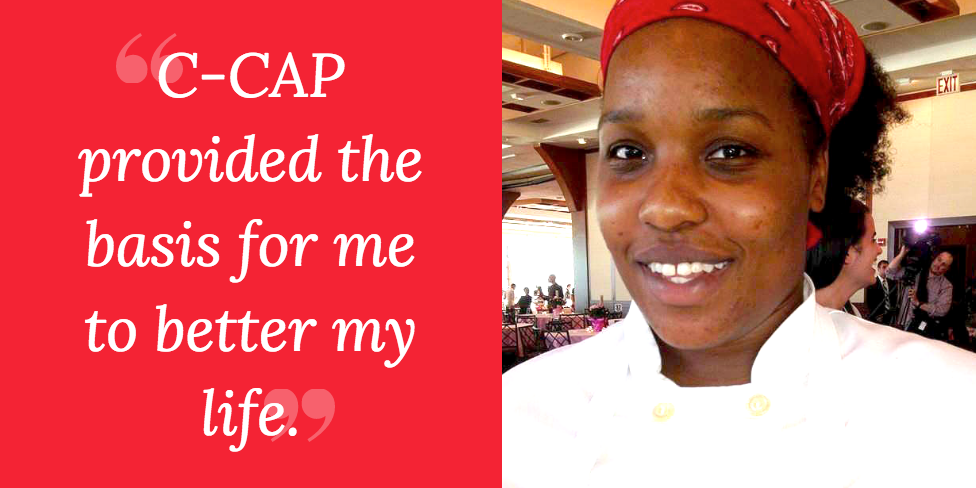 Krystal was born and raised in a single parent home where basic necessities were hard to come by. Gangs, drugs and violence were abundant in her neighborhood, and a difficult home life made it hard to focus on school. Realizing that cooking boosted her spirits, Krystal got involved with C-CAP and eventually won a full-tuition scholarship to the Culinary Institute of America. She is the first person in her family to earn a high school diploma.  After graduating from the CIA, she moved to NYC where she currently works at The Spotted Pig, a Michelin-starred restaurant in the West Village. Her upcoming stage in Spain is something she never could have dreamed of growing up in her Chicago neighborhood.

Please consider making a gift to help C-CAP continue its work of transforming lives through culinary education and career training. Your support will help students like Krystal and Alex pursue their culinary dreams and break the cycle of poverty.

Farmers and Technology: An Unlikely Pair

Over the past 100 years, farming has evolved thanks to new technology (hello, they’ve got robots in Japan!) but many think it’s gone too far and are trying to bring farming back to its roots.  How do we continue to incorporate new technological advances in the field while producing an ethical and sustainable farming culture?

This is a question millennial farmers are taking on, but the cards are stacked against them as their debt rises and food prices drop.  So how do you pay off your student loans, revitalize your grandparents’ farm and support your family?  Read on to find out more and join the chatter at #agrotech. 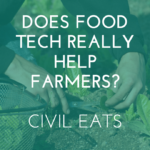 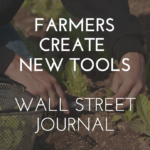 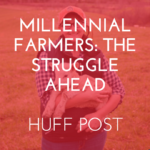 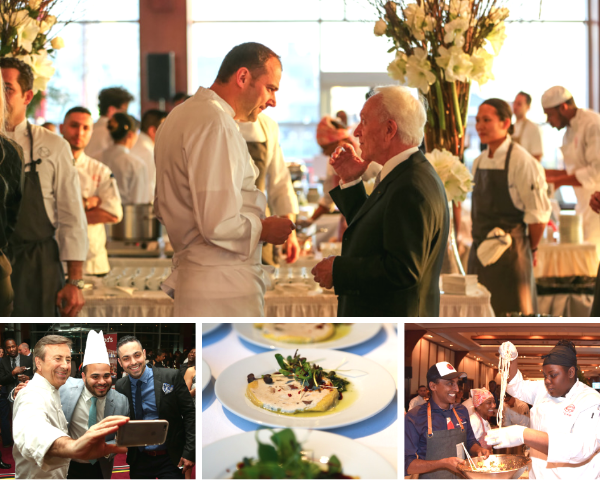 Annual Benefit
March 9
On Wednesday, March 9, we held our Annual Benefit to honor acclaimed chef, restaurateur and author Daniel Humm of Eleven Madison Park and The NoMad. Special thanks to Will Guidara, Daniel’s business partner, who chaired the event. With over 800 guests, 42 chefs, over $1.2 million raised and temperatures in the 70s, it’s fair to say we had an excellent evening!

C-CAP is a national non-profit that transforms lives of underserved high school students through the culinary arts. 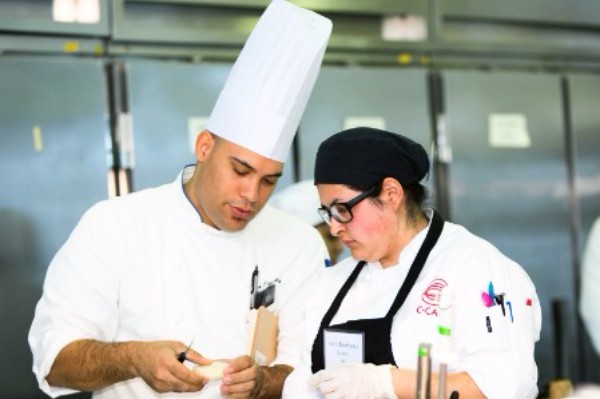