On Thursday, March 2, millions of viewers will tune in to find out who will be crowned the newest Top Chef. Will it be C-CAP alumnus Sylva Senat? He’s not telling! Here’s what he will share with us:

What was the highlight of your time on Top Chef so far?

The highlight for me was to meet all the great chefs and work on the challenges they had waiting for us. I think most of us – especially me! – were just staring at the chefs like the rock stars they are! 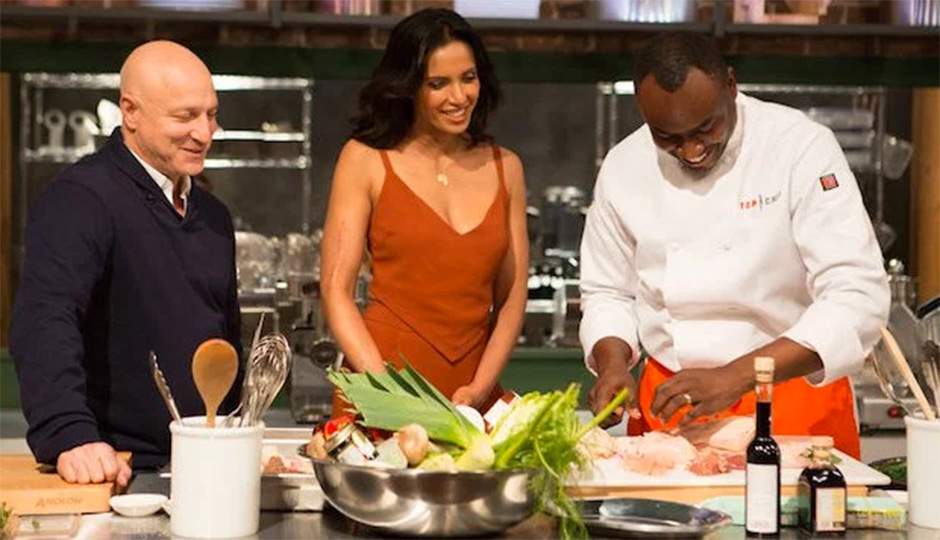 You didn’t know of legendary Southern chef and cookbook author Edna Lewis before the show, but after winning the challenge she inspired (with Skillet-fried Snapper with Garden Vegetables and Vegetable Broth), you certainly do now!

You know, growing up in New York City, I was really trying to learn and be inspired by the chefs that have come and gone. I was not really into Southern cuisine. However, I learned she was a lot more than Southern food. I learned of Patrick Clark around the time I was at Aquavit with Marcus Samuelsson and his son Preston Clark came into the kitchen as an intern a few months later.

How has your experience in C-CAP helped you on Top Chef?

The experience of C-CAP through the years really pushed the idea of thinking on my feet and doing well during the Quickfires, as 20 minutes is really 20 minutes!

What are you working on right now?

Currently I am laying out the menu and concept (with Maze Group and Senat & Co.) for Maison 208, a new boutique restaurant in Center City Philadelphia.

Are you starting to get recognized on the street?

You’ll have to watch and see what happens next!

Chef Sylva Senat graduated from John Dewey High School in Brooklyn in 1997. He participated in the Daniel Boulud / C-CAP Scholarship Competition in 2007, and won an all-expenses-paid trip to France and the opportunity to study at the Institut Paul Bocuse in Lyon.

Tune in every Thursday night at 10pm EST to watch Top Chef on Bravo. Make sure to live-tweet tonight while watching, using the hashtag #CCAPLovesSylva to show your support!