As the election creeps up on us, it’s time to take a look at how the White House eats. Being President of the United States, you might expect to be treated to a four-star meal three times a day. Not quite. When it comes to what the President can eat, there are quite a few restrictions. First off, it can’t kill them. Any food that could potentially give the President food poisoning is off the table, a sad day for all ceviche loving Presidents! On top of this, the President picks up the check for most of the meals. Aside from official state functions, that extra grilled cheese gets tacked onto the President’s monthly bill.

Side note – The highest kitchen in all the land wasn’t always sparkling clean. In 1933, Eleanor Roosevelt’s housekeeper found enough cockroaches in the kitchen that she demanded a complete renovation.

C-CAP Board Co-Chair Marcus Samuelsson had the honor of cooking the first state dinner for the Obamas. You can check out that amazing menu here. When President and Mrs. Obama visit NYC, they head up to Harlem as often as possible to eat at Marcus’ Red Rooster. So, how did Marcus come up with the perfect feast for the Obamas when they came to town? “There were a few things I had in mind: Harlem, First Lady Obama’s healthy eating initiative, and spring,” says Marcus, but he also wanted to pay homage to President Obama’s Hawaiian upbringing. What he came up with was a lobster salad with spring peas, his famous braised short ribs, and his own version of poke. These short ribs have come to be known as “Obama’s Short Ribs,” and we have the recipe for you! 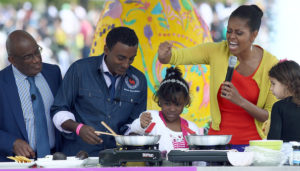