“My name is Alex….I am from a small town where the wind blows…(and) the water flows through Canyon de Chelly…”

Alex Yellowman is a senior at Chinle High School, a small town in northeastern Arizona. Her hometown of about 4,500 people is in Arizona’s high desert. It’s one of around 100 small communities that are part of the Navajo Nation, which spans more than 27,000 square miles across northeastern Arizona, southeastern Utah, and northwestern New Mexico. It’s about 90 miles away from the nearest “big” town, of Gallup, New Mexico – which itself is home to around 22,000 people, mostly of Native American descent.

Alex competed in C-CAP Arizona’s 2017 spring competitions along with several other students from her school, and more from Ganado High School. “There were a full dozen Native American students in preliminaries this year,” says Arizona CCAP Director Jill Smith. “That’s the most ever – and it is really exciting.” Three seniors and a junior reached finals.

“I’ve been cooking my whole life,” Alex says. She learned to cook first with her grandma, she says, reeling off a list of favorite recipes and foods, from blue corn mush with juniper ash to kneel down bread (a kind of fire-baked corn bread) and blue corn tamales. She won a CCAP Industry Scholarship with noted Arizona chef Mark Tarbell. 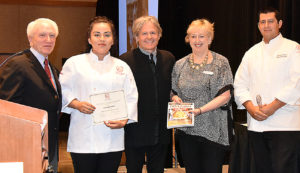 From Ganado, Alayne Kinlecheenie, who won a Classic Cooking Academy Pastry Scholarship and CCAP Education Scholarship, says she is determined to surpass her older sister in educational accomplishment. “I especially like that you can express yourself through food,” she says. “I like that everything – the flavors, the colors, texture – everything can come together.”

Most students become familiar with butchering at an early age – which helps in culinary, Sherry notes, pointing out that most of the students pick up classic knife cuts quickly and easily.

“These are also students who quickly become very good at plate presentation, in part because of the community emphasis on arts and crafts,” he says.

Alayne points out that “I’m a visual learner. But not everything has to be decorated – it’s important to keep it simple. Here, there’s not much variety (in food), and we pretty much stick to basics. But, most everything is home grown, and that’s important, too.” 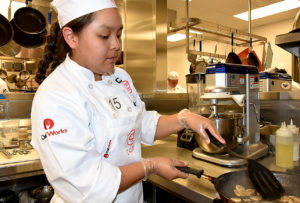 “Food is life,” says Liolya Thompson, also from Ganado. “I want to be able to make a difference in places where people don’t have enough to eat.” She won this year’s Les Dames d’Escoffier Industry Scholarship with Charleen Badman, chef/owner of FnB – a highly acclaimed Scottsdale restaurant.

Haleigh Benally is a junior at Chinle High School, and she’s very excited to begin a year as a “Top Ten” CCAP student and to embark on a journey that she hopes will carry her dreams. “Culinary is fun and always interesting,” she says. “To cook is to make someone happy.”

“Everything is a little slower in the Navajo Nation,” says teacher Sherry. “The students need more confidence and assurance in what they can do and achieve, and they need some assistance from us in developing genuine support systems. Because these are students of exceptional talent.”

“I learned to cook by hand measure,” Alex notes. “How you treat your food shows in your cooking…as when you are calm and happy, you make a soft, sweet dough (for bread). My uncle says, ‘Cook it with love.’” 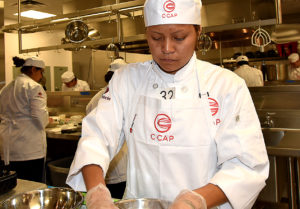 It may be basic – but it sure is tasty

Alayne, Alex, Liolya, and Haleigh all cook with and for their families – and extended family, too, especially for special occasions, holidays, and family get-togethers.

At these gatherings, two foods will always be on the table – mutton and fry bread.

“It can be simple,” says Alayne . “We’ll have chile, potato salad, squash, corn, maybe fluffy tortillas and always fry bread. There isn’t much variety; you really have to stick to basics.”

The meat will derive its taste from the fire and the kind of charcoal used, as well as the age of the sheep.

Fry bread is just that – fried bread. It might, though, be done over charcoal, too.

Knead into a smooth ball of soft dough; let rest for one hour. Divide dough in half and roll each into four to six inch circles.

Heat about one inch of oil in a skillet to about 350 degrees and fry each piece of rolled dough three to four minutes per side.

Serve with butter and sugar or top with taco-style toppings, such as seasoned ground beef, chile peppers, grilled onions, and/or cheese.

Sit down with your family and enjoy!