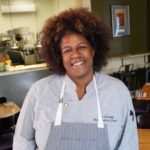 Joy Curmp will be one of the participating chefs in C-CAP’s June 3 benefit honoring Carla Hall, in Washington, DC.

Born in Pennsylvania, one of six children, Crump was three when her parents divorced. With one on one coast and one on the other, the family traveled to be together for special occasions. But plane tickets left little money for fun, so Crump and her siblings found theirs in the kitchen. “Cooking together is what you do to say ‘I love you’,” she said in a 2016 interview.

Crump began her culinary career in Los Angeles, where she worked as a contract caterer for the president of Capitol Records and hosted large-scale functions for musicians and executives. While in Los Angeles, she also worked on private events for Warner Bros. Television and served as a private chef for actors and executives on Warner’s television series and feature films.

In 2005, Joy moved cross-country to Atlanta, Georgia, where she enrolled at the Art Institute of Atlanta. While earning her degree, she studied under Chef Bradley Rouse, head chef for the Atlanta Hawks, and worked to develop specialized menus for NBA athletes and their families. 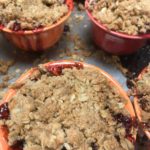 She was in her mid-30s when her dad passed away without warning, and she had an epiphany: “You can make lots of money doing something you like, or you can do something you love.” In 2008, she founded FOODĒ as a home-based private event and catering company in Atlanta. In 2010, FOODĒ grew to a physical location on Caroline Street in historic downtown Fredericksburg, Virginia, where diners flocked to its farm-to-table philosophy and casual feel. “We’re flip-flops and jeans,” its motto goes. “We are redefining fine dining.”

When Crump’s special spin on Southern classics, like shrimp and grits and her mother’s fried chicken with waffles, caught on, they needed more space. In 2016, FOODĒ moved into the old National Bank building on Princess Anne Street, increasing its 30-seat service to 90.

As high as she climbs, Crump seems to stay grounded—big on casual hospitality, big on community, and big on bringing back memories through food. To relax, she might walk her bulldog, Chuck, along the river. But her passions—among them, food policy, fighting hunger, and working with kids—leave little chance to unwind. “I’m cooking this big soup. It’s like a stew, really, of trials and errors and failures and accomplishments, and frustration and learning and growing … and it’s never ever done,” she told a TEDxRVA audience in 2017. “But that’s cool, because in my world, the best recipes take a long time.” 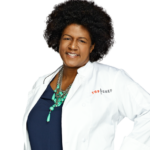 In 2014, Crump represented Virginia as a participant on “Top Chef,” Season 12.