“This program is unique; we are proud to be part of it.”

Best Manufacturers, based in Portland, Oregon, makes the world’s largest line of whisks — or whips, the term used by culinary professionals — hand-assembled in the United States, from 8 inches long to 4 feet long, sized up every 2 inches. They are the only home whisk manufacturer recognized by the National Sanitation Foundation, an independent, accredited organization, that helps develop standards and tests and certifies products and systems, with the mission to protect and improve global health. According to Best president John Merrifield, in the world of culinary equipment, sanitation and durability are the most important requirements. The whip’s design facilitates cleaning and reduces the risk of collecting bacteria — and it’s durable too. 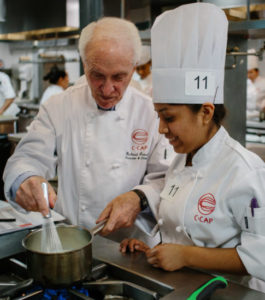 Richard Grausman, founder of C-CAP, first met John Merrifield’s uncle, Jeff, at a kitchenware trade show in Chicago some 25 years ago. John took over the company a few years later and has been a loyal supporter of C-CAP ever since. He says it’s hard not to respect the program for its quality and results. “Where else,” he asks, “can you reach people from all walks of life, who are interested in cooking, and provide them with the schooling necessary to give them a career?”

John was always interested in cooking, watching his mom cook, and after college, his father offered him a stake in the company he had bought in 1959, making this year Best’s 60th anniversary. At the outset, the market for whips was almost exclusively made up of industry professionals. If a home cook wanted a whisk, there wasn’t much choice beyond the dime-store variety. In the 70s, cooking became a US cultural phenomenon, in reaction to the plethora of processed food flooding the nation at that time, and a consumer market developed. Now, Best’s sales are divided almost equally between consumer and professional buyers.

It’s increasingly hard to reach the consumer today, with big retailers and on-line sellers looking for major vendors and international supply chains rather than specialty manufacturers. To compete, Best does some private labeling for national accounts and focuses on its core restaurant supply dealers and independent housewares stores, with long-standing quality and a variety of tools made in the United States.

Back when Richard first met John’s uncle, Best did not offer an 8-inch whisk, the size that Richard had used in his Le Cordon Bleu classes in Paris and around the U.S. When asked why, the answer was: “Because no one ever asked for one.” Richard replied, “I’m asking for one now; can you make it?” When Best said that the company didn’t have the tubing for the handle that Richard wanted, Richard said, “Use wood,” and sent a drawing of the exact specifications he wanted. About two weeks later, he received the prototype for the #820 whisk, with a letter thanking him for persuading Best to manufacture it; the company even predicted it would become a best seller. 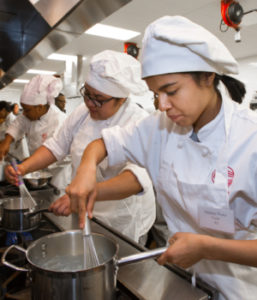 Richard likes to joke with students when he presents C-CAP competition winners with the #820 Best whip that he never received a royalty or was credited as the designer, yet he’s very grateful that Best continues to donate a generous supply every year. The C-CAP participants become ideal brand ambassadors, and an icon of the latest whip is used in the C-CAP newsletter. However, that is hardly what keeps Best involved with C-CAP. John Merrifield believes in its good work. “This program is unique,” he says. “We are proud to be part of it.”