For the past 27 years, C-CAP has had the mission of transforming the lives of students through culinary arts education. For 22 of those years, there has been another mission in the picture, The Culinary Arts Institute at Los Angeles Mission College, a community college in the San Fernando Valley.

Chef Instructor Jesse Sanchez began his personal studies at the Culinary Arts Institute in 1996. He remembers the budding relationship between C-CAP and LAMC, which former Department Chair Louis Zandalasini began and supported since stepping down last year. Currently under the leadership of Chef Louis Eguaras, the chef educators are dedicated to continue expanding the opportunities for C-CAP on the campus.

Both chefs each boast rich culinary careers that have given them the opportunity to cook in an array of settings and for a variety of people. Chef Sanchez believes his experiences in the restaurant industry have influenced his ability to successfully teach his students about fundamental knowledge needed to create a career working in the kitchen. He notes that,

“Students really connect with…genuine experiences…and to a certain degree, we are able to steer a student on the path they may feel the most strength.” 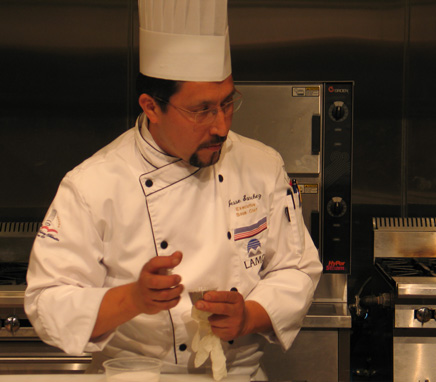 If a student can confidently work within the hustle and bustle of a kitchen, he believes that, with the skills learned and the right attitude, his students can find careers they can be proud of.

Chef Eguaras, who spent his formative childhood and adolescent years in fast-paced professional kitchens, continued his formal culinary training as a young seaman in the U.S. Navy. This would eventually lead to working at Camp David and the White House Staff Mess, where he had the privilege to prepare meals for members of Congress, dignitaries and celebrities, as well as former President Clinton and former President and First Lady G.W. Bush. Given his past experiences, he has learned that most importantly, “there is no room for politics in the kitchen.” He shares that,

“I worked for both Presidents Bush and Clinton and have a saying — ‘Everyone likes chicken!’”

With the right perspective, professionalism, and passion, knowing that regardless of what’s going on around you, he encourages young cooks to enjoy the ride and go after their goals purely for the love of cooking and eating. 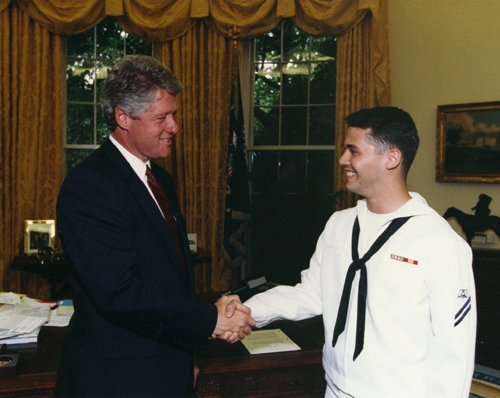 By opening up their kitchen to C-CAP Los Angeles, LAMC has played a vital role in contributing to our mission to transform the lives of disadvantaged youth through culinary arts education. Working for LAMC has enabled Chef Sanchez and Chef Eguaras to meet young cooks of all backgrounds and both appreciate the diverse students that come through their program.

Chef Eguaras anticipates greater opportunities in culinary arts education for the future and trusts that both C-CAP and LAMC will continue to produce incredible contributors who will influence the foodservice industry all over the country and the world. He feels fortunate to have his unique past experiences and loves to share his story with his students. He has always pointed out that following his passions—despite the grueling work, long hours, and no holidays off—has been a driving force in advocating for a career in the culinary arts.

Chef Sanchez agrees that dedication to your craft and perseverance to succeed are required. He wants to remind students to “be aware that…recognition does not occur overnight, and it will take…countless hours of hard work to have a rewarding career in our industry.”

Appreciations: The Chefs at the Culinary Arts Institute at LAMC want to take the time to thank the following for their many efforts in strengthening the relationship with C-CAP