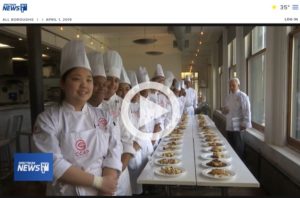 Under the discerning eye of volunteer professional judges – including Sara

Moulton, protégée of Julia Child, and TV host, author, and former executive chef of Gourmet Magazine; French Master Chef Hervé Laurent, whose career spans from Le Cordon Bleu to the Institut Paul Bocuse and now to Maître Cuisinier de France; head judge Toni Robertson, originally from Burma and now director of Food and Beverage at the Four Seasons Hotel in New York; and C-CAP alumni – these enthusiastic high school seniors prepared chicken chasseur, pommes tournées, and crêpes with crème patissière and strawberries. During the intense, two-hour competition, taste and presentation as well as texture, technique, cleanliness, organization, and speed were all rated. As C-CAP founder Richard Grausman said, “Speed is part of our industry.” He urged the young competitors to push themselves hard, to finish in 1 ½ hours if they could. “Taste along the way,” he encouraged. 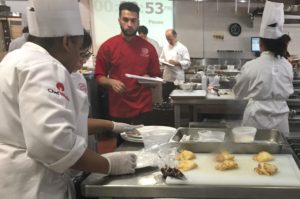 He also reminded students that they are part of a growing and dynamic industry that offers myriad work pathways, from chefs in restaurant kitchens, to caterers, corporate dining providers, private chefs, and careers in food marketing and awareness. These varied possibilities allow for a nine-to-five schedule, so one can also raise a family, as an alternative to the traditional long hours of the restaurant cook. In fact, the self-discipline, reliance, and confidence that C-CAP programs impart to its students prepare them for many of life’s challenges and opportunities, not just those encountered in the kitchen.

C-CAP students, their teachers, family members, and friends were present to cheer them on. ICC students and staff offered a buffet lunch to all. C-CAP alumni, now holding successful positions in the culinary world, marveled that they too had taken part in this competition several years ago, and now they are the judges! They could certainly empathize with these young competitors.

Results and scholarships will be announced at the New York Awards Breakfast on June 30, at the Pierre Hotel.