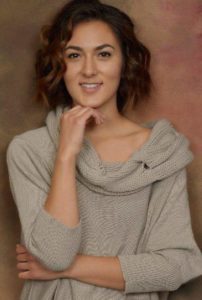 Amanda Rubio joined the culinary classes at Perry High School as a junior. She recalls seeing someone come to her school from Johnson & Wales to do a talk on molecular gastronomy, which ultimately led her to apply to and attend the summer program at their Denver campus that same year. The trip to JWU motivated Amanda to bring her GPA up and get into the culinary program at JWU after graduation.

She returned to culinary classes her senior year and competed in the C-CAP Preliminary Competition, but did not advance to the Finals. She was so determined that she made her way to Johnson & Wales anyway, after graduating high school in 2013. There, she studied Baking & Pastry at JWU’s 2-year program, graduating in 2015 and moving back to her home in Gilbert, AZ in 2017. Amanda wasn’t sure if she wanted to own a business, so she took at job at Panera Bread while building a small baking business on the side. After getting all the proper licensing, she now runs her business out of her home. Baby Jane’s Custom Cakes Bakery has been open for almost a year and Amanda was able to leave her job at Panera to pursue her business full time.

Amanda was reintroduced to the C-CAP community at an alumni dinner hosted by C-CAP Arizona Culinary Coordinator Nicole Swartz in January 2018. After reconnecting with fellow alumni, she decided to start volunteering more to get involved with the C-CAP community. Since she has connected with C-CAP Arizona partner, Pizzario, and started supplying them with baked goods every week, as she slowly begins to expand her services as an entrepreneur.