"Eighteen years ago I sat in a culinary high school program that changed my life."

“C-CAP defined the meaning of opportunity and provided me with the confidence that could make me successful if I worked hard enough.” 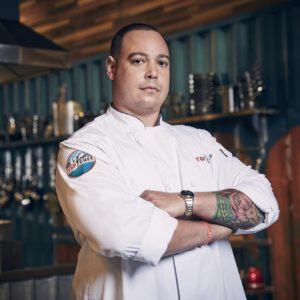 With a name like Brother Luck it would be easy to attribute your success to good fortune, but Brother’s is a result of hard work, determination, and passion. As a teenager, Brother fell on hard times when his father passed away at age 10 and shortly after his mother began serving prison time. Without strong parental support, Brother was close to following a similar path to the gang members and scammers which he’d befriended. However after relocating from the San Francisco Bay Area to Arizona, Brother enrolled in C-CAP at Metro Tech High School in Phoenix. The free food was intriguing enough to join the cooking classes, but he eventually found a passion in the kitchen that would set him up on an incredible journey inspired by a love for food and service.

“I spent my whole senior year training,” Brother admits. “I’d come to school in the morning and train. Then in the afternoon, I went to the Art Institute of Phoenix to train with a master chef. Then I’d work the line at the Hyatt all evening.” Brother eventually was awarded with enough scholarships to attend the Art Institute of Phoenix, including one from the college, which named him “Best Teen Chef.” His time in college would lead to a diverse career cooking in places around the world including in Kanawaza, Japan; San Antonio; Chicago; New York City and finally in Colorado Springs where he would start Brother Luck Street Eats. There he was honored as “Best Local Chef” by Colorado Springs Independent and “Most Cutting Edge Restaurant” by The Gazette Newspaper.

In 2016, C-CAP awarded Brother with an alumni scholarship from The Gohan Society to expand his cooking and travel experiences in Japan, while the Joyce Chen and Helen Chen Foundation allowed Brother to extend his training and exposure into China—opportunities that have shaped both his cooking style and personal perspective. With his determination and the support of his culinary community combined, Brother’s path seems to not have been forged based on good fortune alone. “C-CAP defined the meaning of opportunity and provided me with the confidence that could make me successful if I worked hard enough.

Since his global stages, he opened his very own restaurant, Four by Brother Luck in downtown Colorado Springs to rave reviews in March of last year. Brother also has an impressive array of television appearances under his belt that include appearing on Food Network as a Chopped finalist and winning his episode of Beat Bobby Flay. Most recently, Brother was a favorite on Top Chef’s Season 15, controversially being sent home over a delicious dish, but giving his all in Last Chance Kitchen. “I’ve been fighting my whole life and refuse to give up. I’ve been cooking for 20 years—my creativity is unlimited.”