No matter what, you have to have a good work ethic; take advantage of every opportunity; and surround yourself with good people who will challenge you to be your best you. 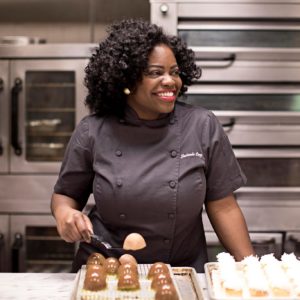 With a career spanning over eight states in the last fourteen years, pastry genius Lasheeda Perry might very well be the Best Baker in America. At the very least, she is on Food Network’s baking and pastry series of the same name, which is premiering its second season next week. Lasheeda also makes C-CAP history as the first female alum to be featured on a multi-episode reality cooking series!

Chef Perry started her career in the kitchen as a C-CAP Philadelphia student under the instruction of culinary teacher, Mrs. Wilma Stephenson, at Frankford High School. After participating in C-CAP’s Final Competition, Lasheeda was awarded a full-tuition scholarship to Johnson & Wales University in Providence, Rhode Island, where she expanded her knowledge and found a myriad of invaluable mentors with whom she still keeps in contact.

She went on to gain experience in positions across the United States, specifically with multiple Four Season Hotels and Resorts properties, where she is now Executive Pastry Chef at Four Seasons Hotel Atlanta. Prior to that, she credits her position with Bon Appetit Management Company at the LinkedIn Corporate Campus in California with giving her the foundation that made her the leader she is today. There, Chef Perry had the opportunity to help create a pastry program from scratch, and assisted with developing the structure of the pastry stations. By the time she left in 2016, her team was producing an average of 3,000 desserts daily throughout four cafes.

Chef Perry’s accolades include opportunities to travel around the world to expand her culinary horizons. She ventured to China through a C-CAP connection with Philadelphia Master Chef Joseph Poon; won the “Taste Down Under” competition and a two-week culinary adventure in Australia as a college freshman; and tasted her way across the United Kingdom while interning abroad at the Adare Hotel and Golf Resort in Ireland. Lasheeda also blew the competition out of the water when in 2012, she appeared on an episode of the Food Network’s former TV series, Sweet Genius, where she won the title and $10,000.

Her hard work as a leader and sheer talent as a pastry artist, though, are nothing short of the pure joy and cheerfulness Lasheeda exudes in any title she’s held. She is a force of positive energy, and acknowledges the many people who made it possible for her to have the career she has now. Between the mentors she gained through schooling and traveling, her former lead chefs, the teams she has led, and the customers who adore her delectable sweets—Lasheeda shares her success with all those who have been with her along the way. “Yes, you want the food to be visually appealing and to taste even better, but that human connection is the icing on the cake.”

It’s clear that Lasheeda’s positivity has contributed so much to her ability to defeat insurmountable obstacles as a teenagers, and to be the resilient woman she is today. “I’ve grown a lot as a leader. I believe in creating an environment for my team that is challenging, yet still fun and filled with laughter.” Lasheeda’s advice to anyone unsure of their future is that, “No matter what, you have to have a good work ethic; take advantage of every opportunity; and surround yourself with good people who will challenge you to be your best you.”