Without the program, I would be in a different position now.

Growing up in East New York, a residential neighborhood in the eastern section of Brooklyn with some of the highest crime rates in the borough, Warren Ottey did not have many local culinary programs available to him so, starting in grade 10, he made the two-hour trip by subway, ferry, and bus to Staten Island to attend a high school with a C-CAP program. “Early morning classes were tough,” he said. Compared with the typical high school culinary course, which is just another period or class to pass, at C-CAP he met students who shared the same passion for cooking; they became his peer community.

During school holidays, they participated in the Cooks Club, meeting in teams, where their competitive personalities learned to work together in group settings. In Summers Youth, 14- to 16-year-olds received job training, from front of the house to waiting and hosting to role-playing what to do when running late for work.

Warren recalls his C-CAP teachers, many with whom he is still in contact, such as Caryn Hayes and Carla Contraras for culinary and Cathleen Mitchel, his advisor. “She offered support to help you find yourself, to figure out what you really wanted to do, what would make people happy,” he recalls. “They helped you pinpoint who you were as a young adult, so you didn’t get confused later on. They pushed you and encouraged you. Without the program, I would be in a different position now.”

After attending a summer boot camp at the CIA in 2008, he went on to Le Cordon Bleu in France in 2009, and the French Culinary Institute, now the International Culinary Center, in New York in 2010. 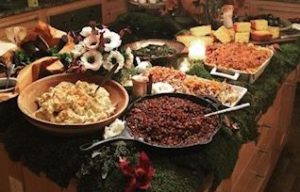 Warren currently runs his own private catering business, which allows him to follow his artistic passions – he is responsible for not only cooking, but presentation, floral arrangements, and creating a unique setting.

He is also an assistant food stylist, making many commercial brands’ dishes look appetizing. Styling on camera, where positioning and lighting play such a crucial role, is a new skill to master.

Every year, Warren travels to a different country, to acquire new tastes and techniques. He is saving up to one day open a bed and breakfast in New Orleans.