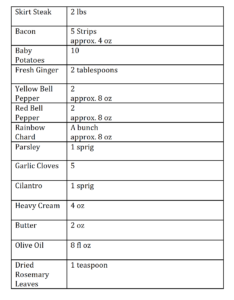 cold pan. Take the cold bacon and place it on the cold pan. Cook over low

heat. Once the bacon is fully cooked remove from pan and allow to cool. Once

the bacon has cooled down mince to create small bacon bits. Take a paper

towel and line a small bowl. Take bacon bits and place in the bowl and set

aside. Save bacon fat that was released while cooking to use when searing the

▪ Take skirt steak and cut at an angle dividing into pieces of approx. 3-4 inches

long. Make sure cuts are made from left to right until you get 6 to 8 pieces. In

a large bowl mix a teaspoon of salt, pepper, and dry rosemary leaves. Once

seasoning is mixed add in steak and make sure each piece is lightly seasoned.

spread out. Let sit in the refrigerator for about 30 minutes.

▪ After steak is chilled, remove from the refrigerator and re-season with

kosher salt and pepper on each side. The salt will help the steak have a crisp

for a crispy golden brown layer.

▪ Once seared, place the meat in the oven at 350 degrees to achieve a rare or

straight down. A straight cut will cause the steak to break apart and lose its

▪ Take your 4 bell peppers and chop off the top and bottoms.

▪ With the Rainbow Chard, remove the end of the stem and just chop up the

top portion with the leaves.

▪ Sauté the vegetables in a sauté pan with a tablespoon of olive oil.

vegetables from the pan and spread them out in a tray so they can cool down.

tablespoons of salt to season the water.

▪ Over high heat, bring the water to a boil then drop in your potatoes.

▪ While potatoes are boiling, in another sauce pan use ½ Cup of Heavy Cream

and ¼ cup of Butter, whisk at medium heat till butter melts and they infuse

together. Let the liquid scorch, just a little bit of flavor.

work fine. Anything with a sharp point) and poke the potato to pick it up. If

with a slotted spoon.

▪ With a sifter over a mixing bowl, place your potatoes in the sifter and push

them through with a fork to mash them very fine.

▪ Once all potatoes are mashed and in a bowl, use the heavy cream and butter

that was made earlier to liquefy the potatoes.

▪ Once your potatoes are mixed with the liquid, zest a bit of ginger into it and

▪ Process till everything is blended well and not chunky

▪ When plating, we recommend garnishing your potatoes with the bacon bits

in the microwave or in the oven when your steak is done, just be sure to